Every year since 2010, the amount of time the average American spends commuting to work has gotten longer and longer. In 2015, more than 3.6 million Americans traveled 90 minutes to work – each way.

Over the course of an entire year, Americans who spend 26 minutes (the national average) driving to and from work give up nine full days to their commute. For the millions who commute 90 minutes each way, more than a month each year is committed to the time just getting to the office.

No matter where you fall on the spectrum, those seconds, minutes, and hours can significantly add up. Utilizing data from the American Community Survey between 2009 and 2015, we determined which major U.S. metropolitan areas are getting up early (before 5 a.m.) to commute to work, which are sleeping in, and how this time could be affecting you in and out of the workplace. Keep reading to see what we uncovered.

The Opportunity to Sleep In

Even if your boss doesn’t know it, there’s scientific evidence why starting the workday later (say around 10 a.m.) could actually enhance performance at the office. Studies have shown no external factor has a bigger impact on the amount of sleep we get as adults than our jobs, and the earlier your shift starts, the less sleep you’ll get on average. Americans who start the workday at or around 6 a.m. typically get six hours of sleep compared to Americans who clock in between 9 a.m. and 10 a.m and tend to score nearly an hour and a half more rest each night (putting them along the same vein of the recommended average by the CDC). And what happens if you’re not getting enough sleep? Reduced productivity, a lack of focus, less satisfaction at work, and a decline in your overall cognitive capacities – none of which are good for business.

So which U.S. cities seem to have gotten the memo with the most commuters heading into work after 9 a.m.?Atlantic City, New Jersey; Ithaca, New York; and Las Vegas, Nevada, had the highest percentage of people potentially sleeping in and starting their days later.

If you often commute before the sun is up, this doesn’t have to spell disaster for your beauty rest – as long as you’re going to bed early enough the night before. In fact, some of the most successful CEOs in the U.S. wake up long before dawn and go to bed early enough to be productive during the day. Research has shown our internal clocks encourage us to move more in the mornings for many biological reasons that ultimately help early risers get more stuff done in the same amount of time as night owls.

The highest percentage of early morning commuters (those leaving home before 5 a.m.) between 2009 and 2015 occurred in cities that also had some of the earliest starts to their workdays. According to the American Census Bureau, over 13 percent of Americans got up before the sun in Elkhart, Indianaand where the typical resident starts their day at 7:15 a.m. In Pascagoula, Mississippi, the average workday starts at 7:06 a.m., and the number of people commuting before 5 a.m. averaged nearly 12 percent. 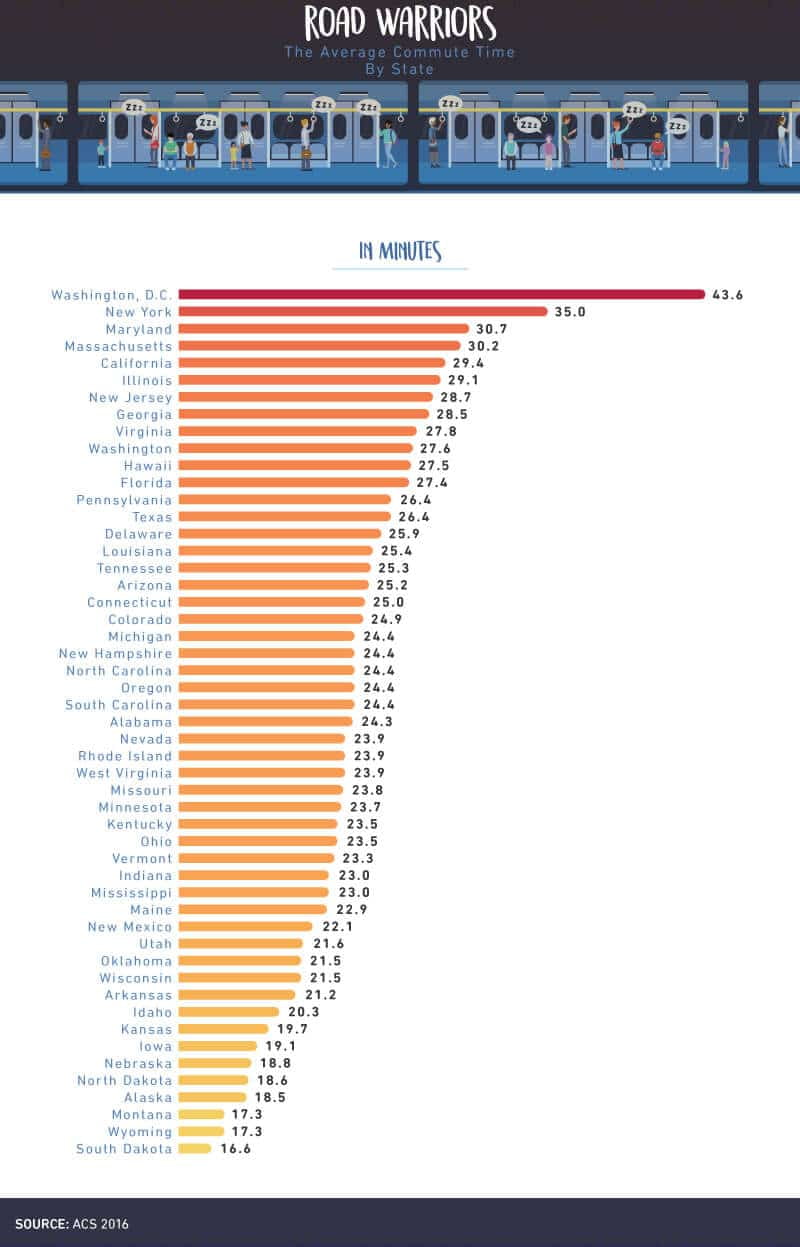 Besides having to get up earlier in the day to beat rush hour – and presumably go to sleep earlier to make sure you’re well-rested for the day – the worst roads in America for daily commuter traffic are costing nearly $2.4 billion in lost time alone each year. While not ranked as the worst traffic in the country, people driving into Washington, D.C., spent nearly 44 minutes, on average, getting to work. It’s probably not a smooth ride, either. Each driver in D.C. loses an estimated $1,700 every year as a result of idle traffic and congested lanes.

If you find yourself driving through one of the busiest cities in the U.S., be prepared to wait. If you can even find a place to park, the traffic in New York City isn’t exactly known for being expeditious, and aggressive drivers (and pedestrians) don’t make matters any better. Following Washington, D.C., New York (35 minutes), Maryland (almost 31), and Massachusetts (over 30) earned top spots for the longest commutes in the country.

Ready for the Long Haul 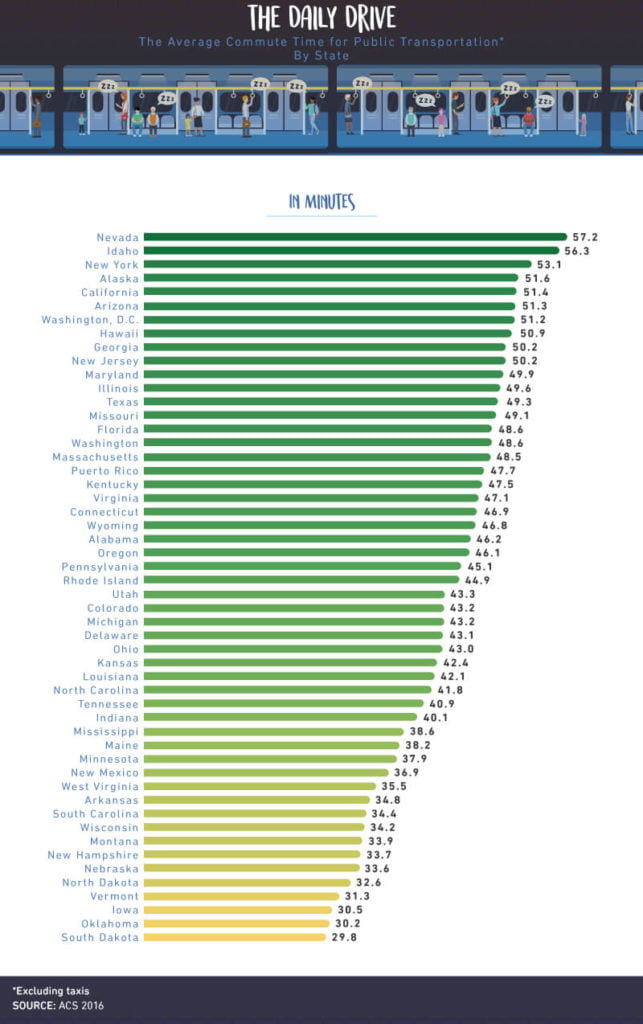 Within the last 10 years, many of the most populated cities in the U.S. have seen a significant decline in the number of people driving in any capacity. In Seattle, less than 1 in 3 people working in or near the downtown area drove to work alone in 2014, a trend helped along by state requirements meant to curb traffic in a rapidly growing city. In these same major metropolitan areas, public transportation is king for people looking to get around the city or even to work on a daily basis. While taking the train to work might make you happier than having to drive, it may not be the end of unnecessarily long commutes.

In New York, where more Americans take public transportation every year than in any other state, and the systems are rated among the best America has to offer, the average commute time was still more than 53 minutes each way. Our research found similar wait times in Alaska, California, Arizona, and Washington, D.C. In D.C., residents ride what might be rated as the worst metro system in the country. With rising prices, reductions in service, and ongoing maintenance, locals experience some of the longest commutes among Americans riding the rails to work – over 51 minutes on average. Still, considering the nation’s capital is also one of the most congested cities in the world, this transportation option might not be so bad after all.

Making the Best of Your Time

No matter how you get to work each day, or what time you have to leave to beat rush hour traffic or catch the morning train, the amount of sleep you get the night before has a lot to do with how the rest of your workday goes. If you’re not catching enough zzz’s each night, that sleep deprivation could affect your prefrontal cortex and, in turn, negatively impact emotional and social behavior and hurt your ability to make good decisions.

Beyond setting yourself up with good nighttime habits (like turning off electronic devices before bed and letting up on the caffeine after hours), making sure you have the best mattress could help you fall asleep faster and wake up feeling more rested in the morning. Visit us online at Best Mattress Brand, to find your better night’s sleep.

For this project, we scraped commuter data from the American Community Survey from 2009 to 2015. Geographic types were segmented by the most popular metropolitan statistical areas within the U.S.

On your way to work? We know the feeling. If you found this study interesting, we encourage you to share our findings for noncommercial purposes, as long as you link back to this page and give credit where it’s due. Don’t forget to credit Best Mattress Brand for the execution of this project as well.

Medical Disclaimer: The information contained on the site should not be used as a substitute for the advice of an appropriately qualified and licensed physician or other health care provider. The information provided here is for informational purposes only.

We’ve reviewed the most popular mattresses of 2020.