If there is one thing all college students know, it’s that sleep is a hot commodity that many want but few get. Keeping your eyes open in the hopes of learning something is a struggle many college students face. To earn better grades, students have been known to pull all-nighters and down coffee like water. Sleep is the last thing on their minds, and it makes sense, right? More hours spent studying means better chances of acing that exam. Or so they may think. The longtime habit of depriving oneself of sleep in exchange for better grades may not exactly be what the GPA doctor ordered.

We surveyed over 1,000 current college students to determine how their sleep and energy habits affect their GPAs. Is the exhaustion that comes from an all-nighter truly the price students have to pay for good grades? Does that extra cup of coffee offer an advantage over the sleeping student? And what about prescription ADHD medications? Our findings may surprise you.

Sleeping Through a GPA 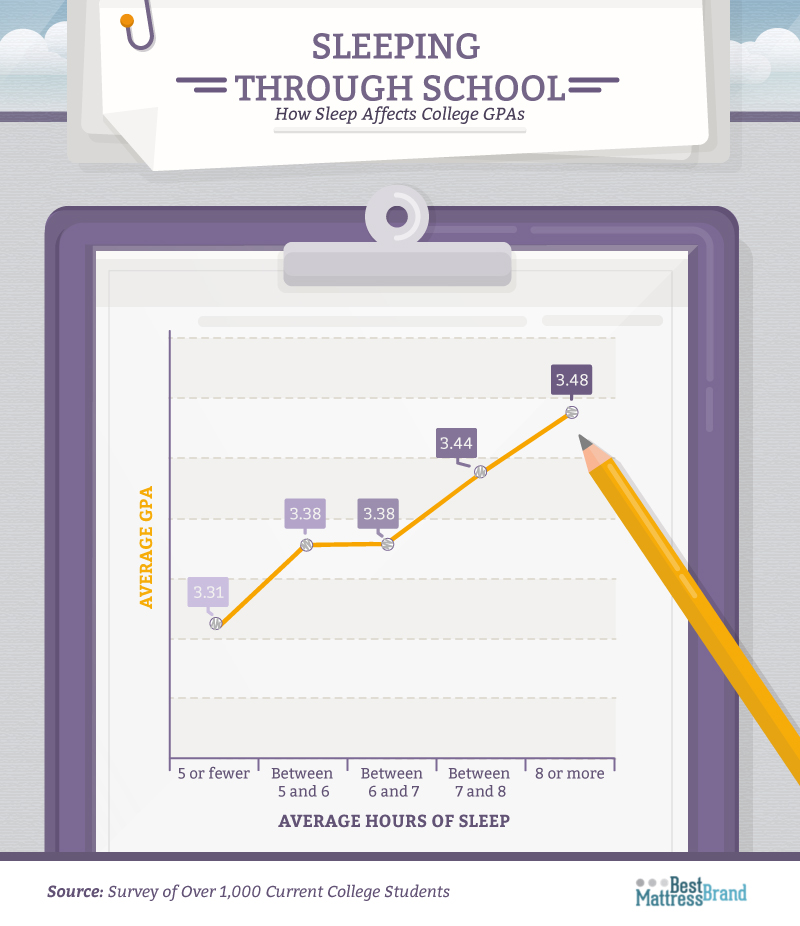 It’s time to trade in those coffees for a better mattress and catch some much-needed shut-eye, because four hours of sleep will not earn you a 4.0 GPA. In fact, the less sleep a student gets, the lower his or her GPA, according to our survey results. While the scientific community still debates the exact purpose of sleep, previous studies have shown that quality sleep is vital for a healthy body and mind, especially when it comes to learning and memory. It shouldn’t be surprising then that students who sleep eight hours or more on school nights see an average GPA improvement of 5 percent over those who get five hours or fewer of sleep each night.

Skimping on sleep may masquerade as a legitimate trade for an increased GPA, but lack of sleep actually increases stress levels instead, while GPAs drop. The long-term benefits of crawling into bed sound much more rewarding than forgoing sleep to cram for another quiz. 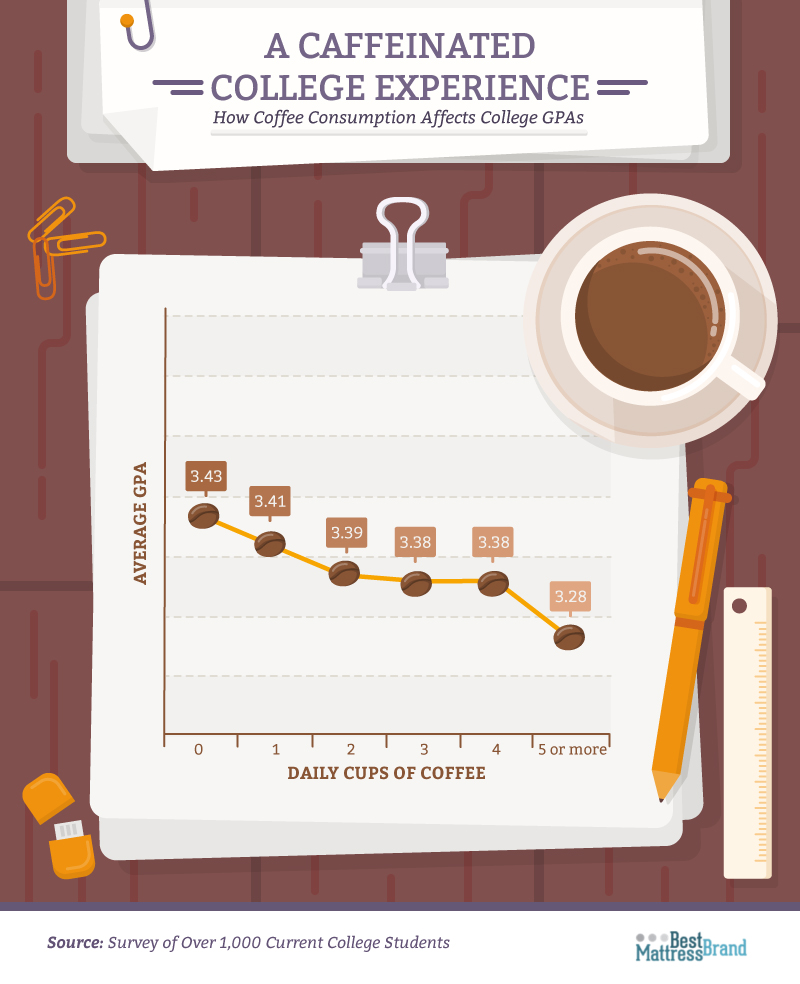 With millennials continuing to push coffee demand to record-breaking amounts, studies also continue to reveal the health benefits of the beloved beverage, so college students may see little harm in their caffeine consumption. Drinking coffee can provide an immediate rush of energy to make it to early classes or stay awake late enough to hit the books, but the craving for a boost may be more harmful than we realize. Not only is the extra caffeine in the body’s system preventing a good night’s rest –– also it can negatively impact a student’s GPA.

Our study found as students consume more daily cups of coffee, the lower their GPA becomes, on average. While coffee may provide energy and allow for extra study time, lack of sleep that may result from caffeine can take away from the body’s ability to form long-term memories. So next time you start to nod off in class, skip the line at the coffee shop and head to bed. Your GPA will thank you.

No Rest for the Student 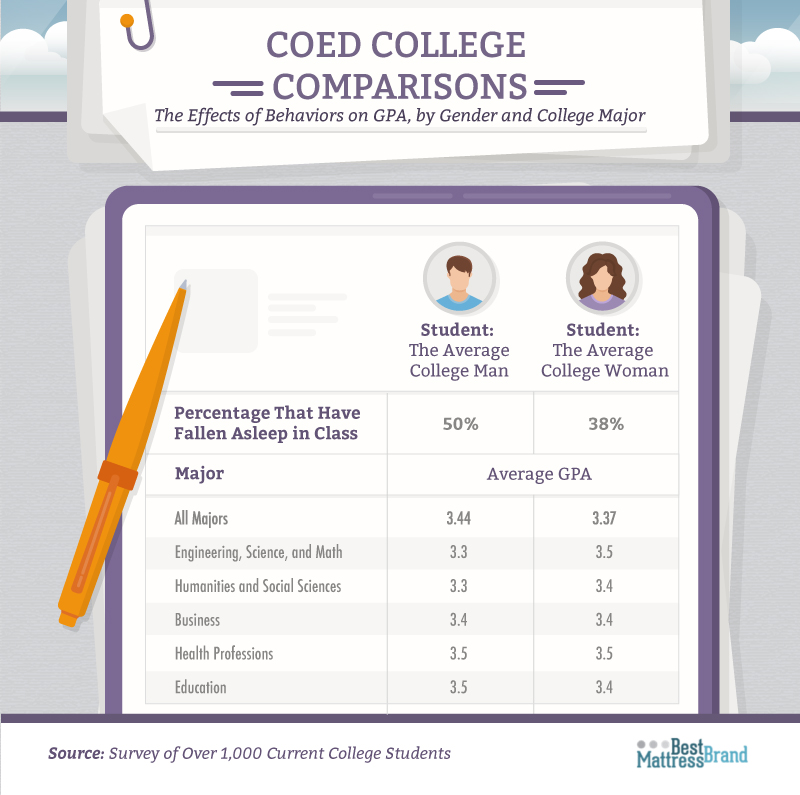 There is a right and wrong way to get sleep, and sleeping in class is the wrong way. Half of the men surveyed fell asleep in class at one time or another, while 38 percent of college women admitted the same thing. This type of sleep may be negatively affecting men’s grades, as women performed better than men, with an average GPA nearly 2.1 percent higher.

Even in engineering, science, and math – fields often thought to be dominated by men – women outperformed men by two tenths of a GPA point. Getting the appropriate amount of sleep at night so that you can remain awake during classes is an essential step to getting your desired GPA.

The Effects of Staying Awake 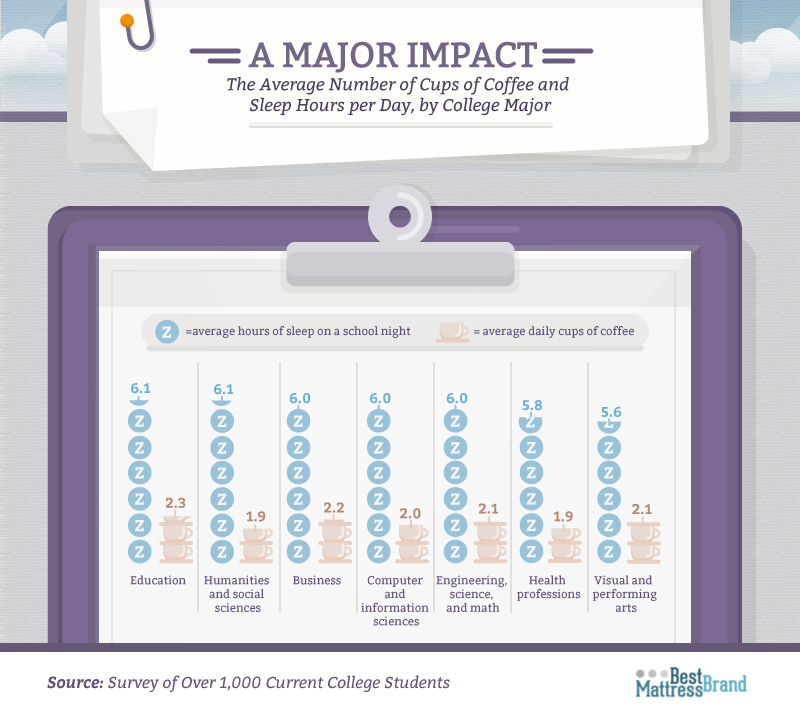 College is all about preparation. When it comes to preparing a student for how much coffee they’ll drink or how many hours they’ll sleep, the average habits associated with each college major are good indicators of what the future holds. Education and students studying humanities and social sciences spent the most time snoozing, while visual and performing arts students got the least amount of sleep.

Coupled with the fact that they get the most sleep, education majors also drank the highest quantities of coffee. In the real world, teachers get an average of seven hours and 12 minutes of sleep a night, roughly an hour more than students studying education. Education administrators are also ranked third out of 15 for the heaviest coffee drinkers, which correlates with their top spot for cups of coffee consumed. 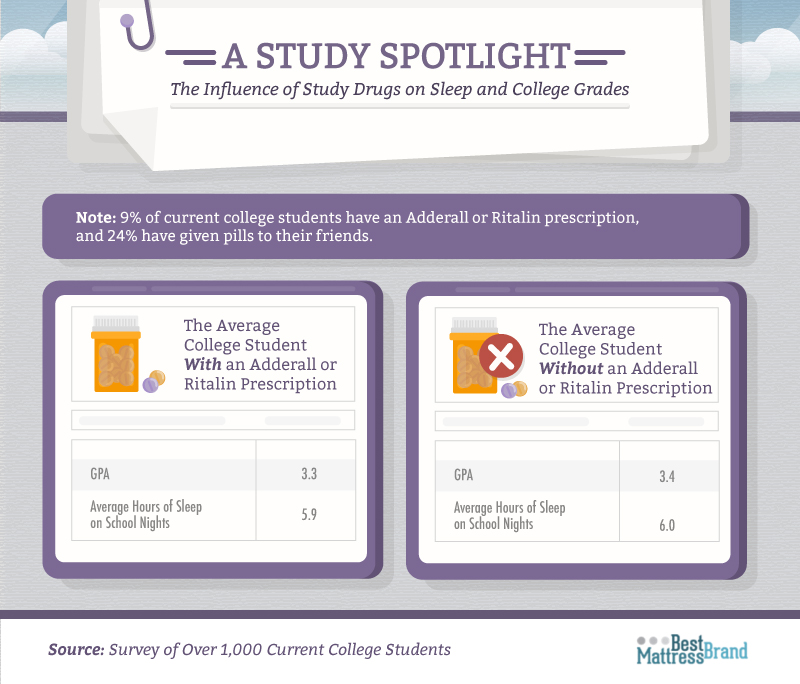 Adderall and Ritalin have become known as “study drugs” that help students concentrate and stay awake. Although these drugs are used to treat individuals who struggle with attention deficit hyperactivity disorders, their use has spread to students trying to better their grades. But do these drugs live up to the hype?

Our study again found that sleep to be a better source of energy than stimulants. The 9 percent of current college students who had a prescription for Adderall or Ritalin slept less and earned a lower GPA on average. Understandably, these drugs often correlate with certain learning disadvantages, so a lower GPA may not be surprising.

Chipping Away at GPAs 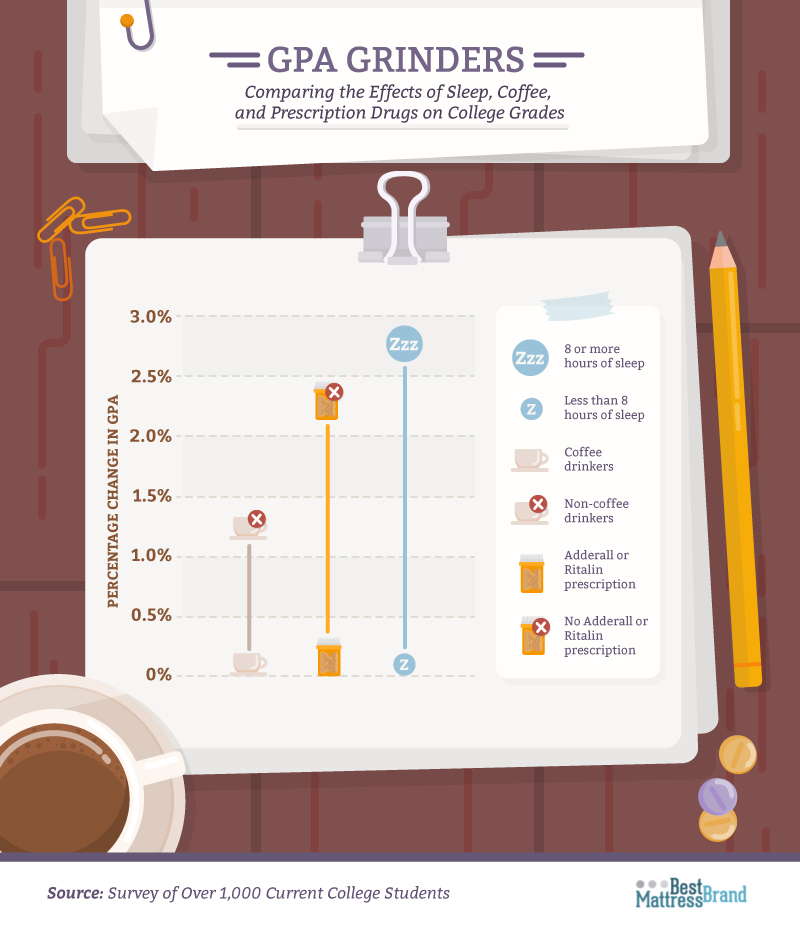 When all’s said and done, there really is no substitute for sleep when it comes to performance in school. Sleep had the biggest and most positive effect on college GPA’s. Inversely, stimulants like coffee and prescription drugs correlated with decreases in grades, in spite of the short term energy boosts. Clearly, quality sleep should be chosen over ingestible stimulants whenever possible.

Sleep and school don’t seem to be a “buy one, get one” kind of deal. Many people act as if one cannot be obtained without sacrificing the other, but that logic is completely wrong. The coffee students drink, and the drugs they may take to keep their eyes open, are doing exactly as they promised, but these habits can also negatively impact their grades. the secret to a dramatic increase in GPA is – you guessed it – sleep. So if you’ve been looking for an excuse to hit the snooze button (and really, who isn’t?), here it is.

Now you can break away from your barista and find your new best friend in Best Mattress Brand – the one who really knows how to give you what you need. Let us help you find the best mattress so you can get a good night’s sleep and get the grades you’ve always dreamed of. Visit us today at bestmattress-brand.org.

We surveyed over 1,000 current college students about how their sleeping and energy habits (drinking coffee, taking Adderall or Ritalin, pulling all-nighters, etc.) affected their average GPA.

Before you take that nap, we grant you permission to use the images and content here for noncommercial purposes. Just don’t forget to link back to this page to give the authors proper credit.

Medical Disclaimer: The information contained on the site should not be used as a substitute for the advice of an appropriately qualified and licensed physician or other health care provider. The information provided here is for informational purposes only.

1 thought on “Can Lack of Sleep Negatively Affect Your GPA?”

We’ve reviewed the most popular mattresses of 2020.