Do people who are satisfied with their jobs sleep better? Are they healthier, happier, and more productive? Do they enjoy their time with family and friends more than those who are unhappy in their professional lives?

To answer those questions and get a feel for how Americans work and sleep today, we surveyed 1,017 people about how their job satisfaction may impact their sleep, physical well-being, and overall contentment with life.

For a majority of people we surveyed – more than three-quarters of whom were satisfied with their jobs – the relationship between those various factors was a positive one. A good job and a good night of sleep are essential for many hard-working Americans, so read on and we’ll show you how closely the two are linked.

How well you sleep affects practically every aspect of your life. The bottom line is simple: People who are happy with their job report sleeping far better than those who are unhappy at work. That’s good news for the seventy-seven percent of our survey respondents who were satisfied with their jobs. 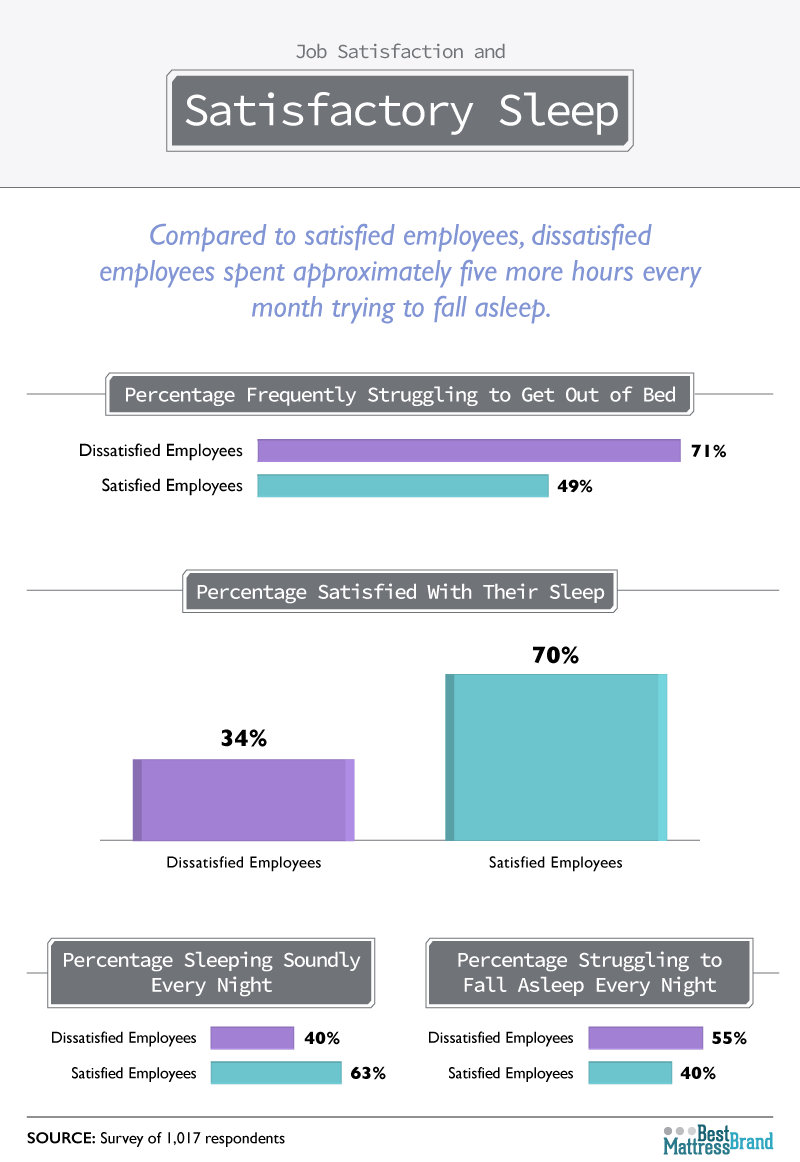 If you toss and turn, or find counting sheep an ineffective path to the land of sweet dreams, your lack of sleep might directly correlate with your work. If you’re like most of our respondents, however, you’re satisfied with both your job and your sleep habits.

Many major corporations provide quiet rooms for their employees to rest or nap during work hours; something frowned on in previous decades. For companies willing to make that investment, our data shows it might really pay off.

Our findings continually point out that if you enjoy your work, you sleep better. Maybe that’s one reason 71 percent of dissatisfied employees struggled to pull themselves out of bed, compared to less than half of employees who enjoyed their job. Researchers have long held an interest in how our jobs affect our sleep, especially given the amount of stress placed on performing at high levels. Sleep experts continuously remind us of the importance of good sleep. For the 63 percent of satisfied workers who said they slept soundly each night, that’s excellent news.

When we looked more closely at the relationship between job satisfaction and sleep, the disparities between satisfied and dissatisfied employees continued to reveal themselves. 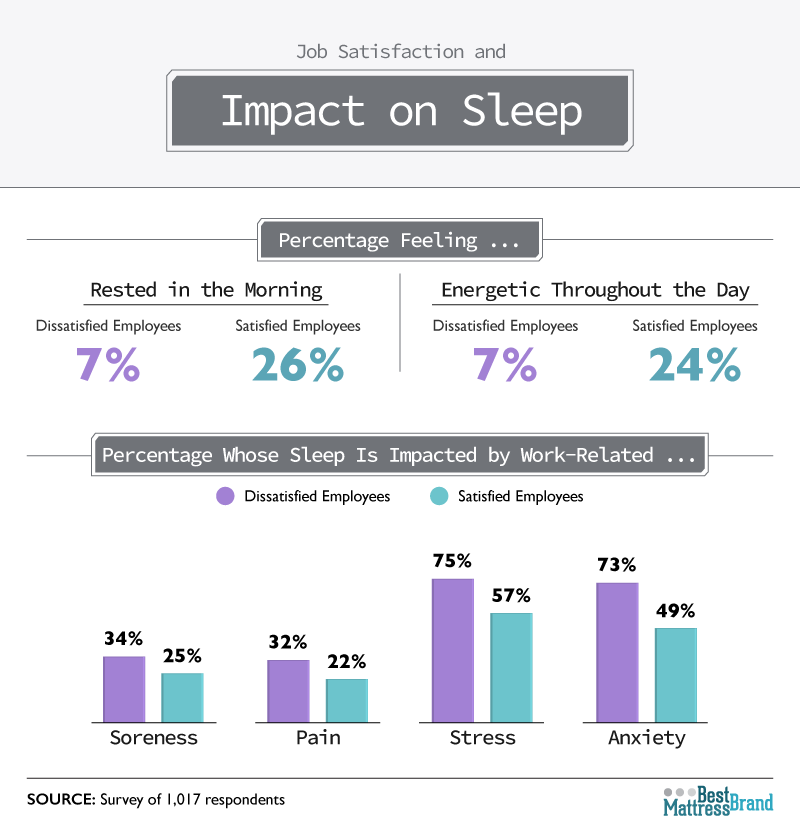 Job-related restlessness comes in many forms. For some workers, it’s aches and pains caused by sitting in a chair staring at a screen all day. For others, it’s the emotional wear and tear that comes with long hours juggling several tasks at once. Workers who were satisfied with their job were less likely to be kept up at night by both.

Dreading Work Can Take a Toll 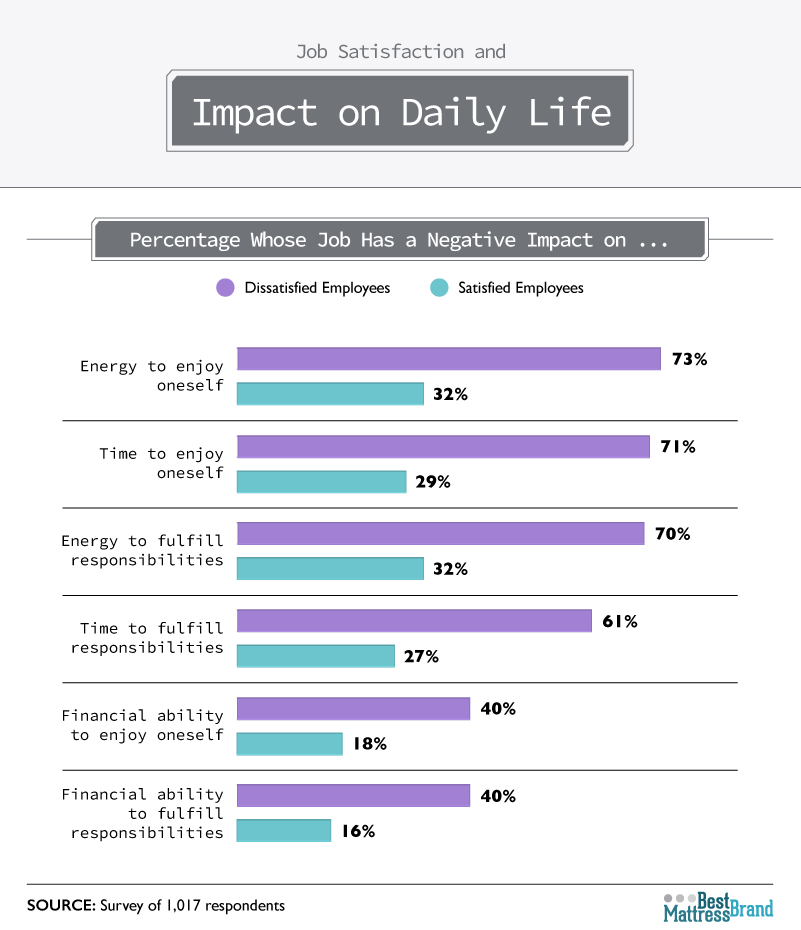 When it comes to having the time, energy, and financial capacity to live life to the fullest, satisfied employees were more than twice as likely in every category to say their job did not hinder their ability to do so.

It’s not surprising that a substantial percentage of dissatisfied employees said their job negatively impacted their energy levels. Seventy-three percent reported their job drained them of the energy they needed to enjoy themselves, and a similar percentage struggled to find the energy necessary to fulfill their responsibilities. Among satisfied employees, those numbers fell to less than one-third. Considering that more than three in four respondents were satisfied with their jobs, that’s great news.

Not only did most dissatisfied employees feel they don’t have enough energy, but a majority felt they lacked enough time. Seventy-one percent of people who didn’t like their job said it impacted their ability to enjoy themselves, and 61 percent struggled to find the time to fulfill their responsibilities.

To further explore how our respondents’ job satisfaction impacted their lives, we looked at the emotional and physical toll of their careers. In both aspects, the divide between satisfied and dissatisfied employees widened. 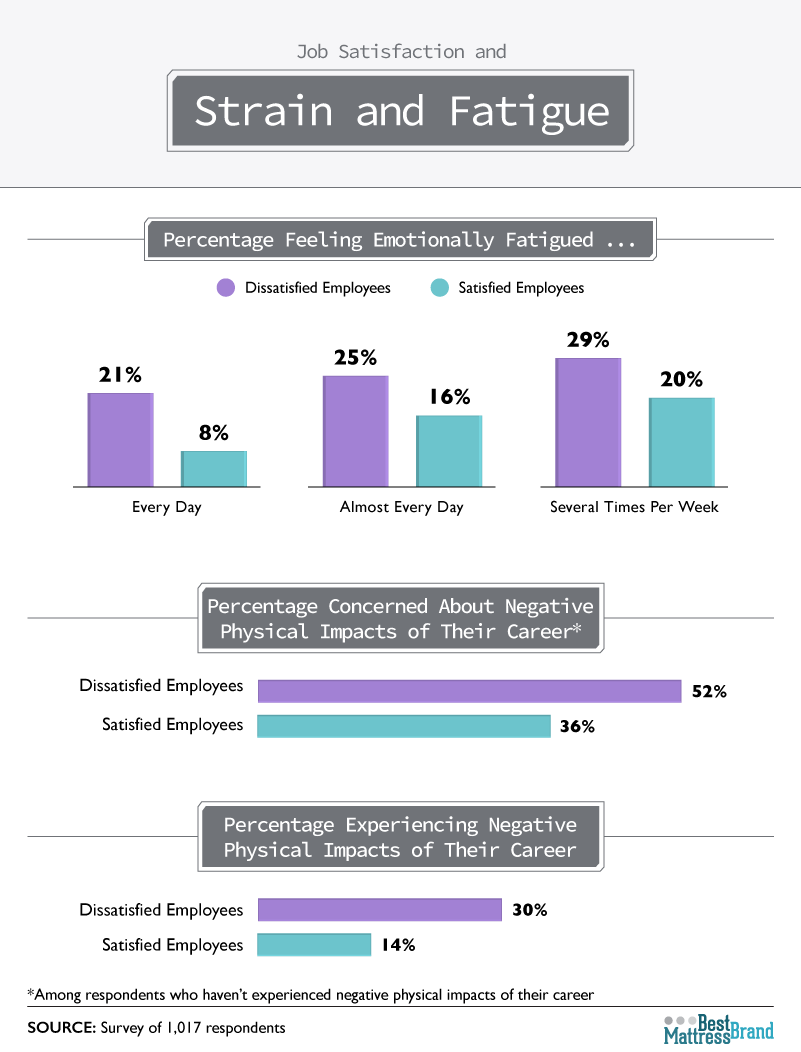 Over 1 in 5 dissatisfied employees felt emotionally exhausted every day, with that figure rising to nearly half when we also include those who felt the same way almost daily. Fortunately, among those who were satisfied with their jobs, those numbers fell to less than one quarter.

Some studies suggest that workers experiencing heavy physical tolls may be inclined to retire early. Given labor shortages in some blue-collar occupations, that could pose problems down the road. Slightly more than half and one-third of dissatisfied and satisfied workers, respectively, were worried about the physical toll of their job.

If you like your job, are you actually more likely to be healthy? Fortunately for a majority of our respondents, our data revealed that health and happy employment often go hand in hand. When it comes to overall health, physical capabilities, and even the amount of control that one feels over his or her health, job satisfaction seems to play a major role. 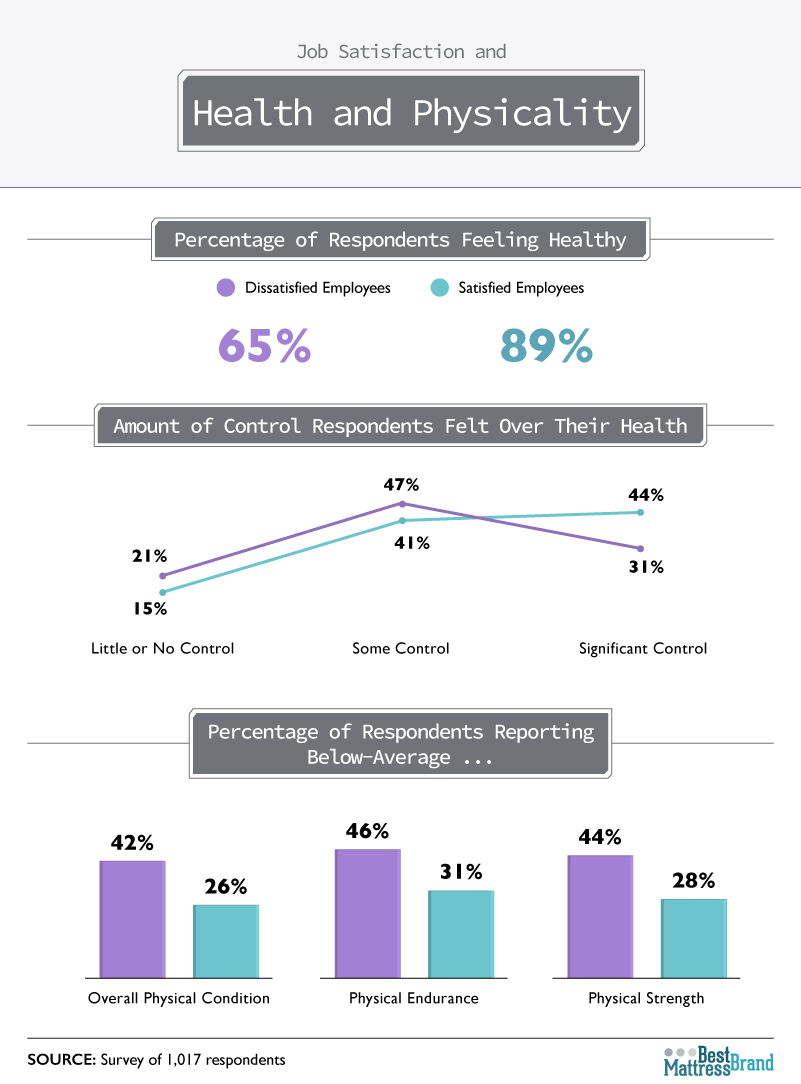 Overall, 89 percent of satisfied workers reported feeling healthy, compared to 65 percent of unhappy employees. Regardless of those differences, we were thrilled to learn that a majority of people felt healthy regardless of their job satisfaction.

Physical strength and endurance are important regardless of the type of work performed. It should come as no surprise that a much higher percentage of dissatisfied workers reported below-average physical capabilities.

According to the data, 46 percent of dissatisfied workers were concerned about their physical endurance, compared to 31 percent of satisfied employees. When looking at physical strength and overall physical condition, we found similar patterns. If you’re like a majority of our respondents who felt good about their jobs, chances are you feel more fit as well.

If someone you know is not happy in their current position, chances are that they’re looking for another job – but they’re not alone. While almost every dissatisfied employee had occasionally wished for a new job, more than 2 in 3 satisfied employees felt the same way from time to time. 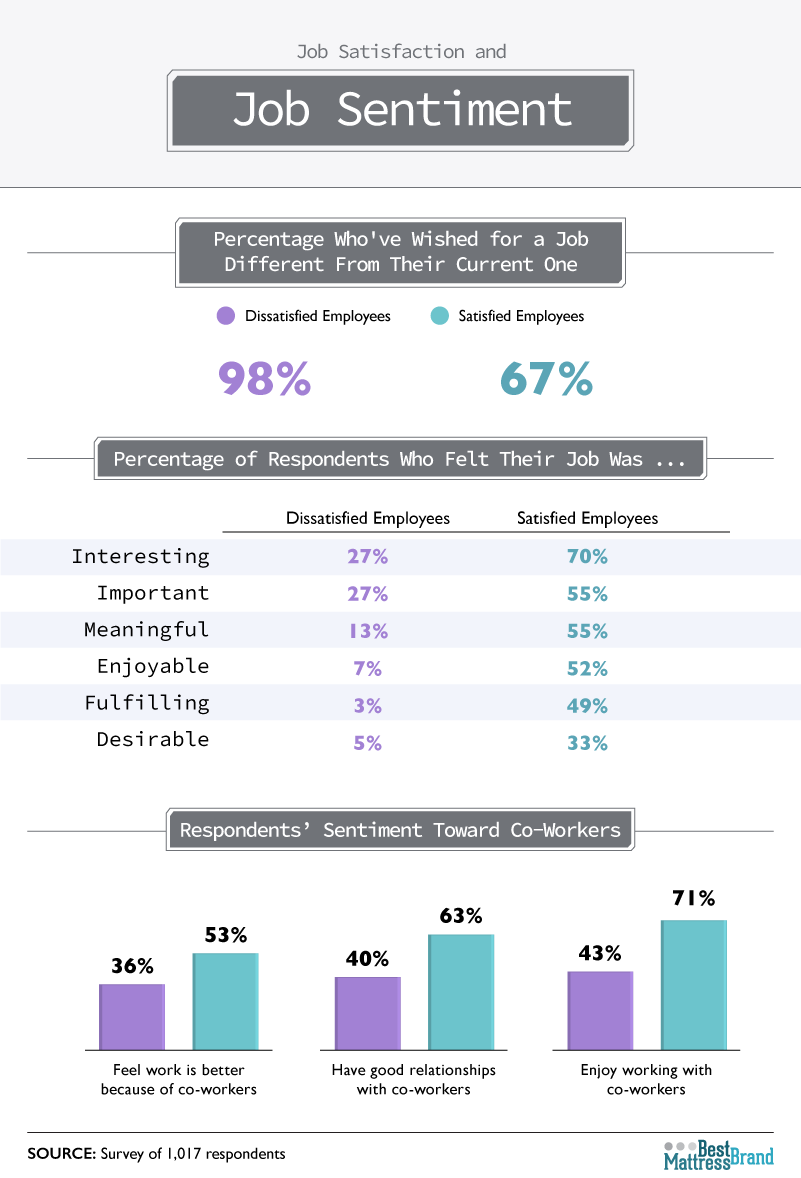 The difference between satisfied and dissatisfied workers may come down to whether they find their current career choice exciting, meaningful, or fulfilling. Whether satisfaction creates those positive feelings or vice versa, it’s clear that satisfied employees feel much better about their work.

Over half of satisfied workers believed their job was meaningful, whereas a much smaller percentage of dissatisfied employees felt the same. One expert, who spent 15 years studying the reasons people love or hate their job, discovered a compelling reason for employee satisfaction: Sufficient praise for a job well done.

Another noticeable difference observed was related to how desirable respondents felt their job was. A marginal 5 percent of unhappy workers thought their job fit that description, compared to one-third of satisfied employees.

Job responsibilities aside, happiness at work seems to be strongly linked to one’s relationship with co-workers. In all three questions asked, a majority of satisfied workers expressed positive sentiments about their colleagues, compared to less than half of disenchanted workers.

Whatever your job is and whomever you work with, they certainly want you to care about the quality of your work. Engaged and motivated employees do great work, but those who are unconcerned about their work can be a liability to their employer and sometimes to themselves. 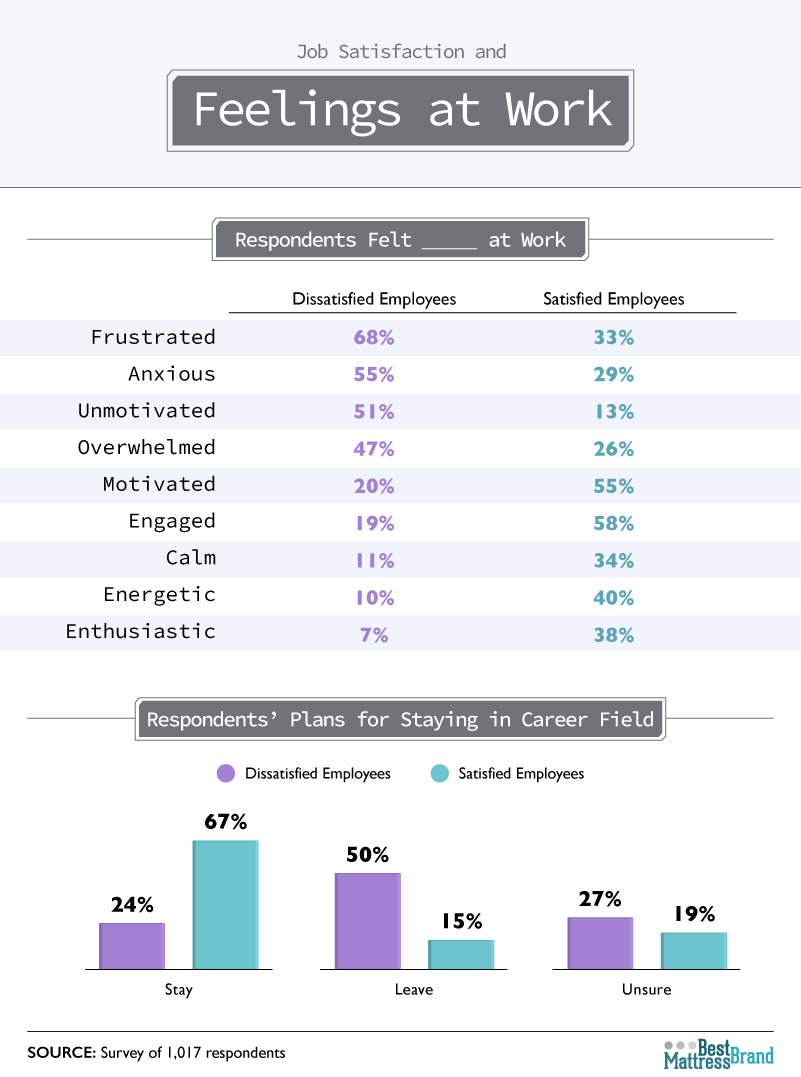 While not particularly surprising, the way our respondents felt at work cast more light on the considerable differences between those who like their job and those who dread it.

The most common emotions our dissatisfied respondents felt at work were frustration and anxiety. Nearly 7 in 10 dissatisfied workers felt frustrated at work, and more than half felt anxious. Satisfied employees, as you may expect, were much less likely to feel the same.

On the opposite side of the equation, satisfied employees were far more likely to experience positive emotions. The overall percentages of content employees who felt motivated and engaged may be lower than most employers would like, but they nearly triple the percentages among unhappy workers. While 58 percent of satisfied workers felt engaged at work, only 19 percent of their unhappy co-workers reported the same.

People often change careers throughout their working years. Just over two-thirds of satisfied employees planned to stay in their current field, compared to less than a quarter of disenchanted workers. Half of dissatisfied respondents planned on changing careers entirely, and more than a quarter considered it but remained unsure.

Happy or Not Happy?

This may be a simple question, but it’s an important one: Do you like your job? According to the results of this survey, if you’re satisfied with your current position, you’ll sleep better.

There are a ton of options if you’re dissatisfied with your job. Perhaps going back to school or taking online courses will help you find a career that better fits you. In the meantime, we do have some suggestions for improving the quality of your sleep.

First, take some time to find the best mattresses available. Here at Best Mattress Brand, we have recommendations for every sleeper out there. Who knows, maybe a great night’s sleep will result in newfound enjoyment for your job!

In some cases, questions and answers have been rephrased for clarity or brevity, and efforts were made to ensure that the opinions of our respondents were accurately and fairly represented. These data rely on self-reporting and are intended for entertainment purposes only. Due to the nature of self-reporting, potential issues include but are not limited to selective memory, telescoping, attribution, and exaggeration.

Getting this engaging information in front of workers is a fantastic idea, and as long as it’s for noncommercial purposes, share it with everyone. It would make us even happier if you would link back to this entire report and provide due credit.