Can Financial Debt Negatively Affect Your Quality of Sleep?

by Ray Soberano Comment on Can Financial Debt Negatively Affect Your Quality of Sleep?
Updated November 5, 2020

Across the country, 80 percent of Americans are in debt today – a reality that could be hurting more than just their wallets.

Research has shown Americans who experience mental health issues are more likely to be in debt. This can also lead to physical health concerns, like high blood pressure and the potential for a stroke, which has led some experts to suggest financial debt should be treated as a public health concern.

To help understand the link between debt and sleep quality in the U.S., we surveyed 1,000 Americans about the debt they owed and the quality of sleep they got regularly. We asked them how many hours of sleep they got each night, how much anxiety they experienced about making payments, and even how debt affected their dreams. Curious to see how seriously snoozing can be affected by debt? Continue reading to see what we uncovered. 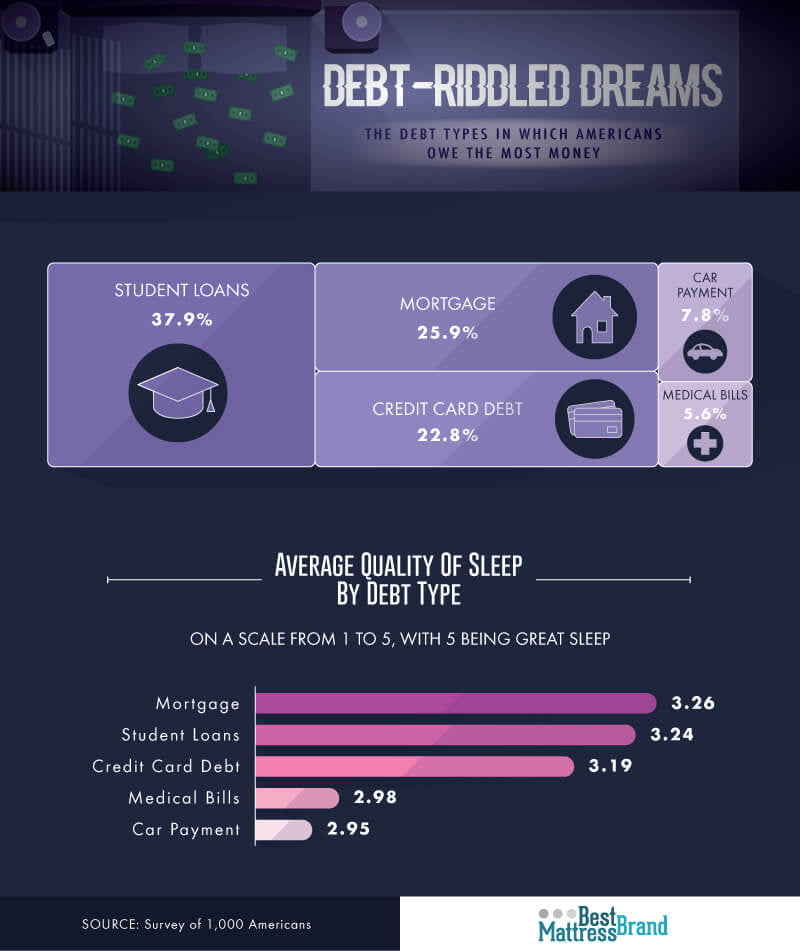 In 2010, the cumulative student loan debt surpassed credit card debt for the first time in history. While credit card debt may have topped the $1 trillion mark in late 2016, 44 million Americans owed $1.3 trillion in student loans by early 2017. On average, that equates to more than $37,000 per student.

Only Americans who owed the most on medical bills and car payments ranked their sleep quality less than a three out of five on our scale (with five being great sleep). In 2016, Americans exhibited confidence in their spending by purchasing more cars than ever, but the number of people newly delinquent on their car loans increased too. In 2017, over 6 million people were at least 90 days delinquent on their car payments – which could be a contributing factor to their poor sleep quality. 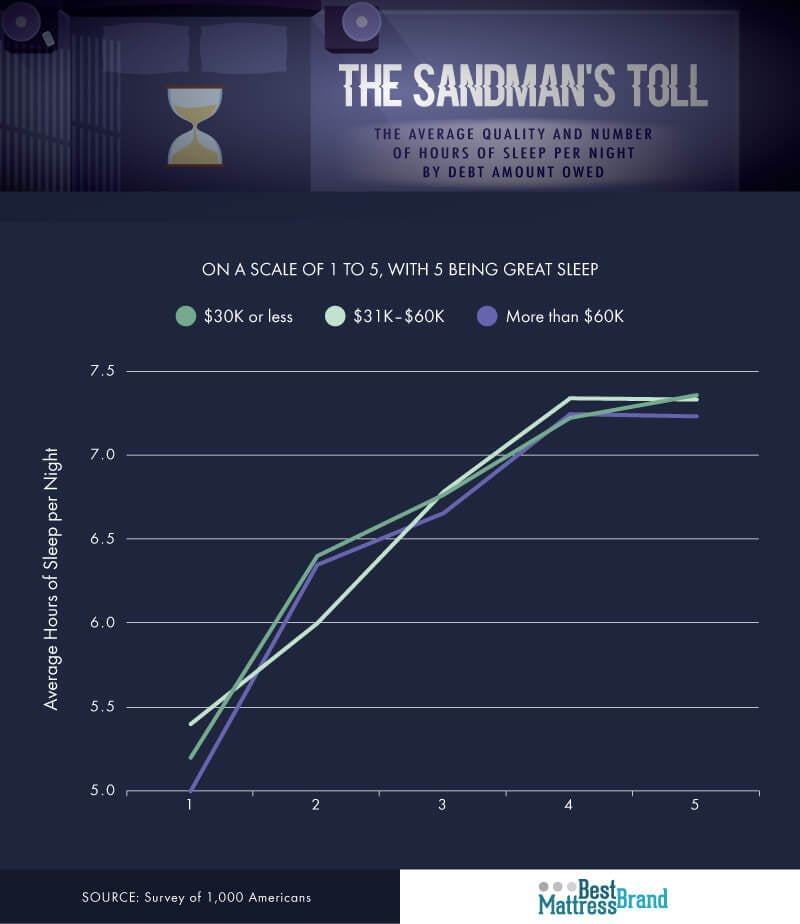 As they like to say, money can’t buy you happiness, but problems with it might be keeping you up at night. Research has shown debt can lead to mental strain, anxiety, and even depression. Even students currently enrolled in school and paying for classes with student loans are more likely to exhibit signs of stress and exhaustion.

Stress from debt won’t just weigh you down during the day. People who experience stress and anxiety are more likely have trouble sleeping at night. This stress could create a vicious cycle of restless nights that impact your mood and physical well-being. One study found more than 40 percent of Americans attributed poor sleep to stress, and more than half of adults said they felt sluggish or lazy when they didn’t clock enough Zzz.

Our study found the amount of debt a person owes could be having a direct effect on how much (and how well) they sleep. Americans with more than $60,000 in debt were increasingly likely to report getting an average of five hours of sleep compared to those with less debt. Moreover, they also reported a lower quality of sleep when they were able to get as much shuteye as people who owed less money. 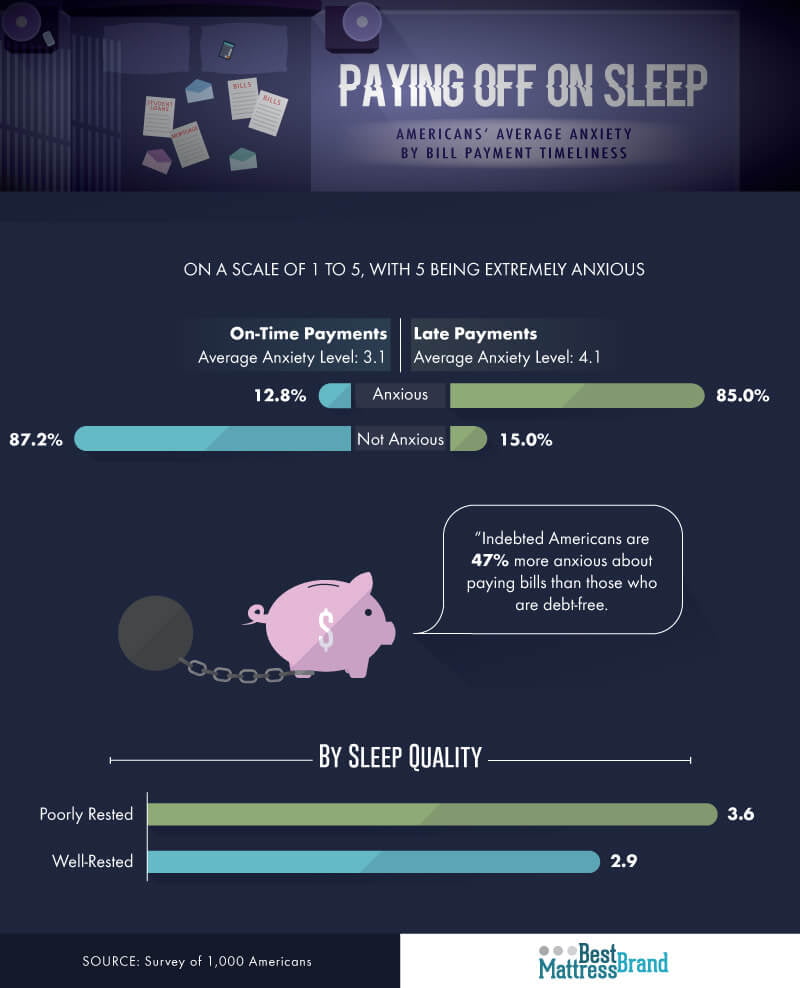 With more than $137,000 worth of debt on average, the American family could be falling behind on many of their monthly payments. Student loan delinquencies are on the rise, more Americans are falling behind on their car payments, and a vast majority aren’t paying off their credit card bills each month. As it turns out, only one form of debt seems largely unfazed by this rising trend in late payments: mortgages. In 2017, mortgage delinquencies and foreclosures fell roughly 1 percent from 2016.

That anxiety can have far-reaching effects for Americans stressed about their debt. Trouble at work, mood swings, depression, and relationship problems can all occur as a result of undue anxiety. Our study found higher levels of anxiety (like the kind experienced by Americans behind on their bills) were also more likely to keep respondents from feeling well-rested, which could serve to further compound the symptoms of stress and anxiety. 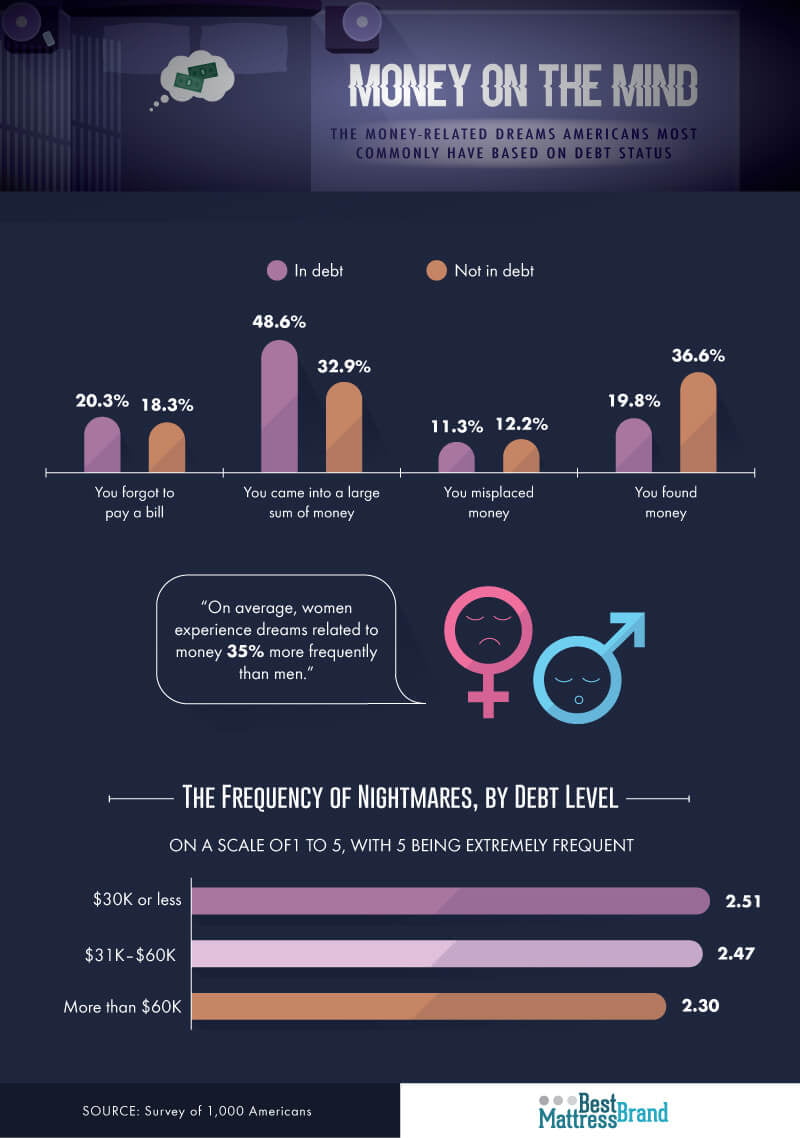 If you often feel anxious during the day, it’s not hard to imagine those feelings seeping into your subconscious as well. Experts have said anxiety is more likely to inspire random and nervous thoughts that could be spilling over into Americans’ emotions and dreams.

Our study of American debt found nearly half of people with financial debt dreamt about coming into a large sum of money compared to less than 1 in 3 people who had no debt whatsoever. People with debt were also more likely to dream about missing their payments, while Americans without debt told us their most common nighttime fantasies about money involved finding it.

Indebtedness may change the types of money matters Americans dream about, but having more debt may not necessarily lead to more bad dreams. Like poor sleep in general, anxiety and stress can lead to more nightmares in adults; however, people polled with less debt were more likely to experience nightmares than Americans with heavier debt. Some studies have shown that debt can grow with income, meaning Americans who owe less may also have less ability to pay back their lenders. 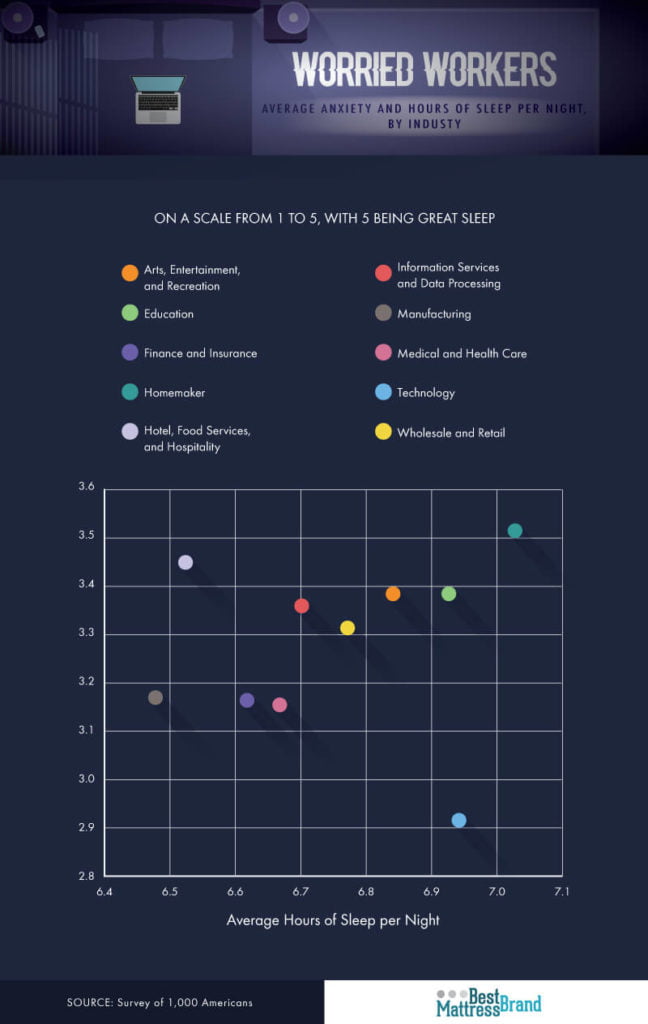 Americans working in certain industries could be experiencing different quantities and qualities of sleep.

While people who identified as homemakers reported more sleep than Americans in any other industry, they also reported having the highest level of anxiety. For parents who stay home to raise their children, day-to-day life may not be without its own stress and emotional challenges. Not earning a paycheck can be a part of the stress stay-at-home parents experience, in addition to loneliness and even self-doubt. Homemakers ranked their stress just above a 3.5 on our scale of five (with five being extremely anxious).

Americans working in manufacturing and hospitality reported getting the least amount of sleep each night (roughly six and a half hours) but felt less anxious than people working in education, retail, or the arts. People working in tech got nearly seven hours of sleep on average and reported the lowest stress levels of any industry. While every job in the tech industry may not be without stress, some gigs could help you find balance better than others. The compensation rate for some jobs could also be a factor in how much anxiety Americans working in tech feel at the end of the day.

There’s no question that debt can lead to stress and anxiety. Considering a vast majority of Americans are living with some form of debt today, you might find yourself tossing and turning at night without realizing what’s got you feeling down. If your quality of sleep is suffering, experts recommend some bedtime routines that could help you feel rested and recharged more often. Making an effort to unplug from technology, incorporate stretching into your evening rituals, or even writing out a to-do list could help you get to bed faster and stay asleep longer.

When it comes to improving your sleep, you want to make sure you’ve got a good partner in the game. Your mattress could have more to say about the quality of sleep you’re getting at night than you realize, and studies have shown that switching things up could help reduce your stress. At BMB, we know that the best mattress means a lot when getting great rest. Visit us to learn more.

For this campaign, we surveyed 1,000 Americans on the amount of debt they currently owed, as well as their quality of sleep per night. Debt was divided into three brackets: respondents owing $30,000 or less, $31,000 to $60,000, and more than $60,000. Five-point scales were used to determine the quality of sleep and frequency of dreams (1 representing poor sleep quality or the lowest frequency, and 5 defined as well-rested or the most frequent).

Oh, you’re still awake? Before hitting the hay, feel free to share this study as long as it’s for noncommercial purposes only. Just be sure to pay the debt by linking back to this page and crediting Best Mattress Brand for the results.

Exercise and Sleep: How Your Sleep Impacts Your Gym Time